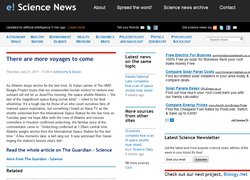 THERE ARE MORE VOYAGES TO COME

As Atlantis drops anchor for the last time, Dr Karen James of The HMS Beagle Project trusts that our irrepressible human instinct to venture ever outward will not let us down.

This morning, the space shuttle Atlantis – “the last of the magnificent space flying rocket birds” – rolled to her final wheelstop. It’s a tough day for those of us who count ourselves fans of manned space exploration, but something I heard on NASA TV as the shuttle undocked from the International Space Station for the last time on Tuesday gave me hope… Read more 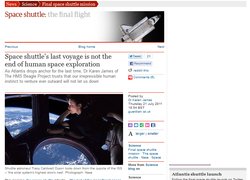 After both the crew of Atlantis and mission controllers in Houston confirmed undocking, the familiar voice of the commentator came in: “Undocking confirmed at 1:28am central time. Atlantis weighs anchor from the International Space Station for the last time.” A few moments later, a bell rang out. It was astronaut Ron Garan ringing the station’s bronze ship’s bell in the traditional farewell to a departing vessel.

I heard that “weighs anchor” as a reminder of the continuity of human exploration, and I heard that bell’s ringing as a promise, to past, present and future generations, that our irrepressible human instinct to venture ever outward will not let us down… Read more