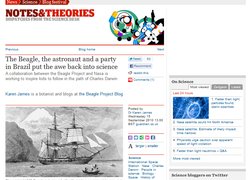 THE BEAGLE, THE ASTRONAUT AND A PARTY IN BRAZIL PUT THE AWE BACK INTO SCIENCE

A collaboration between the Beagle Project and NASA is working to inspire kids to follow in the path of Charles Darwin.

Before joining NASA as a space medicine specialist, astronaut Michael Barratt had been a zoology graduate. He described himself as a James Cook freak, a sailing enthusiast and, at one time, a wannabe marine biologist.

Three years ago, still an astronaut-in-training, Barratt came across a news snippet that caught his attention. A British team was planning to rebuild HMS Beagle, the ship that bore Charles Darwin on his historic voyage of discovery 180 years ago, as a way to “put the awe back into science”… Read more