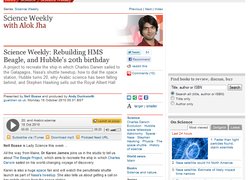 A project to recreate the ship in which Charles Darwin sailed to the Galapagos, NASA’s shuttle tweetup, how to dial the space station, Hubble turns 20, why Arabic science has been falling behind, and Stephen Hawking sells out the Royal Albert Hall.

All the way from Maine, Dr Karen James joins us in the studio to tell us about The Beagle Project, which aims to recreate the ship in which Charles Darwin sailed on his world-changing voyage of discovery.

Karen is also a huge space fan and will watch the penultimate shuttle launch as part of NASA’s tweetup. She also tells us about getting a call on her mobile phone from the space station…Listen