RETRACING THE VOYAGES OF HMS BEAGLE

A round-the-world sailing voyage is a unique adventure. The modern Beagle will retrace one of the most famous journeys in history, which stopped at many ports across the world from South America to Australia to South Africa.

Read about the key events in the history of HMS Beagleand those who sailed with her using our history timeline. Launched in 1820, HMS Beagle completed three scientific expeditions and travelled all over the globe. She is most famous for her second voyage, captained by Robert FitzRoy, on which a young Charles Darwin travelled. Find out about the nineteenth-century history, including the birth and death of FitzRoy and Darwin, the expedition voyages of HMS Beagle, and the publication of On the Origin of Species and Darwin’s autobiography. Also catch up on the recent history and progress of the HMS Beagle Project. 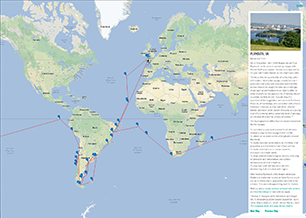 A VOYAGE OF EXPLORATION AND DISCOVERY

Using our map of HMS Beagle’s second voyage, find out about her route and some of the key scientific observations and collections made along the way. HMS Beagle left England for her second voyage on 27 December 1831 tasked with surveying the southern coast of South America. She was captained by Robert FitzRoy, and carried a young Charles Darwin onboard as the ship’s ‘naturalist’. When HMS Beagle returned to England in October 1836, Darwin had sailed 40,000 miles around the world, explored over 2,000 miles inland and collected more than 5,000 specimens. His notes show that he already understood how his experiences and finds were likely to challenge the established view of the unchanging nature of species.