ROBERT FITZROY TAKES HIS OWN LIFE

Vice-Admiral Robert FitzRoy took his own life in Norwood, Surrey on 30 April 1865. Aged almost 60, he had been given leave of absence from his meteorological work due to ill-health a few months earlier. On the day of his death he rose early, walked to his dressing room, kissing his daughter on the way, and slit his throat with a razor. He died penniless, after spending his personal fortune on public meteorological projects.

FitzRoy has been commemorated around the world, with Mount Fitz Roy in Patagonia, southern South America, the FitzRoy River in Australia, Fitzroy Island in the Falkland Islands and Port FitzRoy in New Zealand all named after him. In 2002, the Met Office chose the name of their first leader, FitzRoy, for the shipping-forecast sea region formerly known as Finisterre. 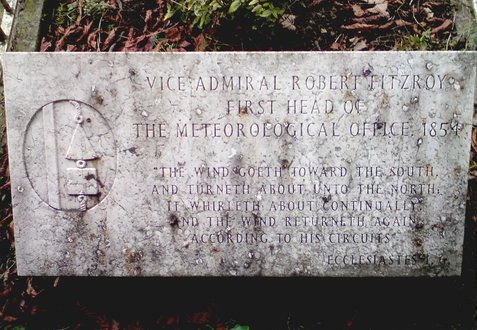