What is ocean science?

What do we already know about the ocean?

The ocean is a salty body of water that covers 70% of the Earth’s surface. We know that it plays an important role in regulating climate by storing and releasing heat, the cycling of water, carbon, nitrogen, and other elements, and weather phenomena such as hurricanes. Water is transported between oceans by deep ocean currents, collectively known as the global conveyor belt, which is driven by differences in water density; at the surface of the ocean, winds create waves and currents. From a geological perspective, we know that the topography of the ocean floor is a result of tectonic plate movement, resulting in a number of seafloor features, including undersea mountains and volcanoes, valleys, trenches, plateaux and mid-ocean ridges. The ocean is home to a wide variety of marine organisms, ranging from microscopic viruses, bacteria, plants (phytoplankton) and animals (zooplankton) to the largest known mammal, the blue whale. The ocean provides a wide of range of habitats, from sunlit coastal waters and tropical coral reefs to the deep abyss, hydrothermal vents and cold seeps, where organisms are able to survive without sunlight. Although we know a lot about the ocean, the majority of it remains unexplored and new marine species are constantly being discovered.

Why is it important to study the ocean?

About 70% of the Earth is covered in water, yet less than 10% of the world ocean has been explored and there are many new species to be found. The ocean sustains all life on Earth and is a vital resource: it provides food, medicines, employment and transport, helps to regulate climate, and supports recreation and tourism. It is also important to study the ocean to understand the human impacts on the ocean, such as increasing ocean temperature, sea-level rise and ocean acidification due to climate change, pollution, such as rubbish, particularly plastics, oil, sewage and toxic waste, and overfishing. This will enable the ocean ecosystem to be managed sustainably and help to inform policy and education. There is also the potential to harness the energy of the ocean in the form of tidal, wave and ocean thermal power to provide an alternative and renewable source of energy to fossil fuels.

Oceanography research is as wide ranging and varied as the ocean itself. Oceanographers are studying topics such as the role of the ocean in the climate system, the interaction between physical, biological and chemical processes, ocean circulation and mixing, spatial and temporal variations in marine organisms and their abundance and distribution, the community structure and composition of marine ecosystems, the export of organic matter to the deep ocean, the cycling of elements, biogeochemcial processes, land-ocean-atmosphere interactions, seafloor sediments and sedimentation processes, past ocean circulation and temperatures, changes in the global carbon cycle, dynamics of plate boundaries and geohazards. Research also encompasses studies on the impacts of ocean acidification, increasing temperatures, sea-level rise and pollution, studies on fisheries management and impacts, and geoengineering options such as iron fertilization.

How is the ocean studied?

Making observations and collecting data, as Darwin did during his five-year voyage on HMS Beagle, are fundamental to oceanography. Nowadays, there are many sophisticated techniques for collecting data, including remotely operated vehicles (ROVs) that venture to astonishing depths, DNA sequencing, which can be used to detect microorganisms and also potential new species, satellites and remote sensing, as well as ship- and land-based surveys and monitoring stations, and dedicated research cruises. Computer models and simulations are also a key part of oceanographic studies and help researchers understand how the ocean works and the likely impact of changes to the ocean system.

International Council for the Exploration of the Sea

If you want to get involved with our oceanography research, or any other part of the HMS Beagle Project’s science programme, please contact us. 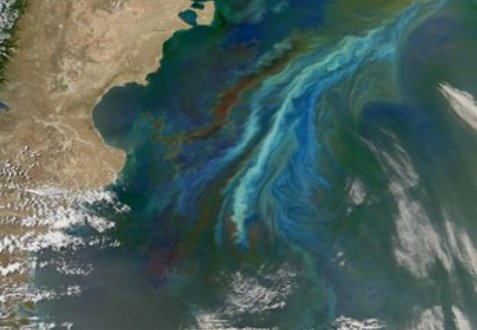 Phytoplankton bloom off the Atlantic coast of Patagonia

Anemone and seastar in kelp forest