HMS Beagle left Plymouth for her second voyage on 27 December 1831. Captained by Robert FitzRoy, the ship carried three Fuegians back to Tierra del Fuego, and a young soon-to-be-cleric, Charles Darwin.

The voyage was tasked with completing the work of the previous journey, in surveying the southern coast of South America, and recording the latitude and longitude of each port of call. For this purpose, the Beagle carried 22 chronometers on board.

Darwin had been recruited as the ship’s ‘naturalist’, with the open remit of “collecting, observing, and noting, anything worthy to be noted in Natural History”. He also provided intellectual companionship for the captain.

By the time the Beagle returned to England in October 1836, Darwin had sailed 40,000 miles around the world, explored over 2,000 miles inland and collected more than 5,000 specimens. His notes show that he already understood how his experiences and finds were likely to challenge the established view of the unchanging nature of species. 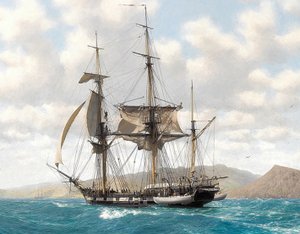